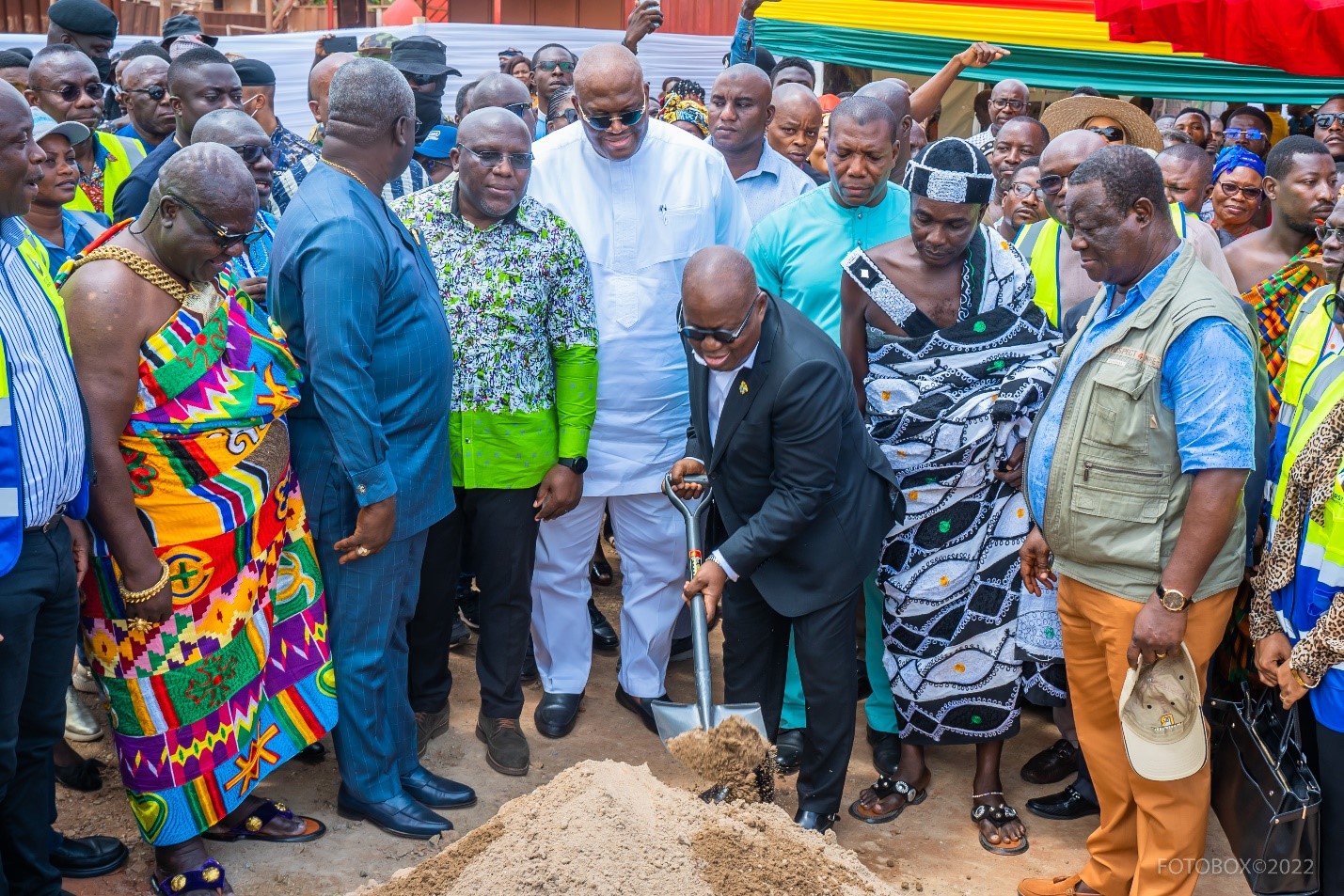 President Nana Addo Dankwa Akufo - Addo has cut sod for the commencement of work on the rehabilitation of the Dome to Kitase road, acknowledging the contractor for the project, Messrs. First Sky Construction, as one of the best construction companies in Ghana.

According to the President, the $35m project covering some 23 km to be funded by the Government of Ghana and the Kuwaiti Fund, will connect the Accra to Kumasi Road to the Accra – Aburi – Koforidua road. At the same time, it also serves as a route for road users between Accra and Aburi.

President Akufo – Addo noted he was happy that it is under his Presidency that the rehabilitation of the Dome to Kitase Road was finally being undertaken, stressing many other road projects across the country were in line with Government’s agenda to provide good, quality road infrastructure to help accelerate the socio-economic development of our country.

This is the second time First Sky Construction, has been praised by the President, who in a similar fashion, announcing the award of the contract for the Asikuma – Have Road project, observed that the contractor is an exceptional one who has demonstrated commitment and high standards when it comes to road construction.

Executive Chairman of First Sky Group, Mr. Eric Seddy Kutortse, contractor for the Dome- Kitase road project, assured that his team would work diligently to deliver the project within schedule and under budget, mindful of the socio-economic significance of the road project to the people of Dome – Kitase and the entire nation.

Mr. Kutortse mentioned that for the past 5 years, First Sky Construction had undertaken a total of 431 km road projects across the length and breadth of the country, which had been successfully completed and handed over to the Government.

"It is heartwarming to add that all roads completed and handed over for use to date have been without defects," he stressed. He added that Frist Sky was currently undertaking a total of 225 km of road projects, all at different phases and stages of completion across the country, including the Dome – Kitase and two major Eastern corridor road projects (Asikuma – Have – 33 km and Oti Damanko – 12km).

Minister for Roads and Highways and Member of Parliament for Atiwa West, Hon., Kwasi Amoako Atta reiterated his ministry’s commitment to ensure that all road projects are delivered to reflect value for money while improving the lives of the citizenry.

Ambassador of the State of Kuwaiti in Ghana, H.E. Mohammed Abdullah Al-Khalidi, repeated his country’s continued support to Ghana in her development journey.

Greater Accra Regional Minister and Member of Parliament for Ablekuma Central, Hon. Henry Quartey, welcoming dignitaries commended the President for the road and appealed to the contractor to consider employing artisans within the catchment area of the road project to boost job creation opportunities in the two constituencies of the project.